I spotted a recipe for simple vanilla biscuits and decided to whip up a batch for when the children arrived home “starving” . I had no issues with the recipe ( to quote Jeremy Clarkson “How hard can it be?”) I used real vanilla bean paste rather than essence because I think it is a far superior product and gives a true vanilla flavour. I substituted salted butter rather than unsalted simply because that is what I had available (and from experience a bit of salt doesn’t seem to distract from the final result too much) the biscuit dough worked out just fine the trouble started when I remembered an old biscuit press that had been passed down to me from Elizabeth’s Mum. I had never used one before so had a quick look at the instructions then made the first attempt…squeezed hard and lots of little caterpillars of biscuit dough inched their way out through the holes no good at all, next attempt I held the press down on to the baking sheet squeezed again lifted up the press … no biscuit.. looked at the bottom of the press and found my biscuit dough had all squished out but had not stuck to the baking paper, after several more attempts I tried different cutters and all sorts of techniques, I even read the instructions properly. I was finally successful (somewhat) in getting biscuit dough to form and stick directly on the baking tray but gave up in the end and simply cut  rounds of the now overworked biscuit dough. Does anyone actually use these things? or are they just another gadget sold to unsuspecting husbands  who are sucked in by slick salespeople and part with precious dollars take it home to the cook who is delighted (but places the useless contraption at the back of the cupboard). Sadly I can’t ask Elizabeth’s Mum if she ever used it, but I know I wont bother next time!. 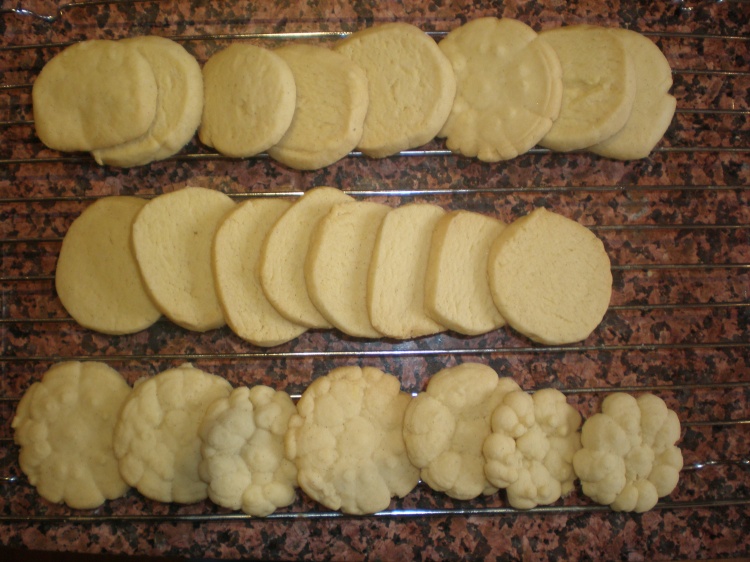 One thought on “How NOT to make biscuits”