Another great pattern from Burdastyle Magazine. Either this or the dress version have been on my sewing to do list since the issue came out last January. I didn’t really need a dress but I liked the idea of a horizontally tucked front yoke on the straight grain and the rest on the bias, especially with a checked fabric.

I’d had a dark checked poly cotton shirting in my stash forever and was probably inherited from my mum. It has a base of dark olive and my favourite turquoise colour in it as well as royal blue and red. I have quite a lot of red in my winter wardrobe, and I’d recently made a turquoise skirt so this was the right fabric for this pattern to make now!

My husband thinks it would have made better pajamas for my mum. He who cooks should stick to cooking!

The pattern has a horizontally tucked front yoke and princess seams. I cut the front out on the bias. It’s a really good idea to check if a plaid is square or rectangular and to forget about using it on the bias if its rectangular, because it’s impossible to match up. Ask me how I know.

I only cut the front pieces on the bias, and went back to easier matching plaid on the straight grain for the back.

The tucks on the yoke are a nice touch. I topstitched them with red, but because the fabric has a red thread in it anyway, this is not as over the top obvious as I initially thought it would be. Here’s a closer view of it. You can also see that I topstitched the collar and cuffs with red too, and that the back of the blouse is not on the bias. 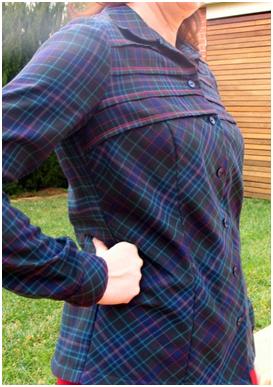 It also look good tucked in (even though I forgot to straighten the skirt waist before the photo was taken- being an non professional fashion model is very hard!)

3 thoughts on “Princess seams and a tucked yoke”