Trust me… we will be eating spit roast chicken…eventually

A BBQ is every man’s birthright… there I have said it. Some say all men need a shed and I believe it.. but the need to BBQ is in men’s genes.

Men who wouldn’t be seen dead in a kitchen practice the art of barbecue with single-minded devotion.

Now some men are content to slap a few snags or a bit of beef on the hot plate, let it char a bit and then pronounce it done. Others go to extremes.

The urge to cook on the BBQ overtook me recently and decided that I simply had to use a rotisserie that had lain in the bottom of the assorted kitchen bits drawer… (every kitchen has one of these drawers… go on, confess, you have one too!)

I assembled the spit, seasoned a couple of birds, showed off my skill in securing them tightly to the spit, and all looked good!

There were two problems. The first hitch was that the rotisserie had been purchased to suit a previous BBQ and the current BBQ did not have provision for a central portion of the grill to be removed.

The second was that the hood could not be put down with the rotisserie in place.

Some modification was obviously needed…

Don’t you just love men’s ingenuity… here is where the afore mentioned shed came in handy. He who cooks disappeared for a while then emerged from said shed with a patentable hood holder-upper…(several brass plumbing fittings screwed together).

The problem now was that the hood sat ajar and the temperature inside was too low… but He who cooks would not give up.

Some doubters offered to go and buy some precooked chicken… they set a time limit, putting intense pressure on He who cooks to perform miracles.

The chickens were rearranged on the spit so that they both rotated on one end of the spit, problem number one solved (sort of…more later)

Into the shed again… then an idea… He who cooks had used bricks to cook pizza on in the BBQ some time ago… He who cooks could use these to block the gap so the bricks were carefully arranged around the rim of the BBQ keeping the heat in…problem number two solved.

What can I say?…don’t try this at home kids! 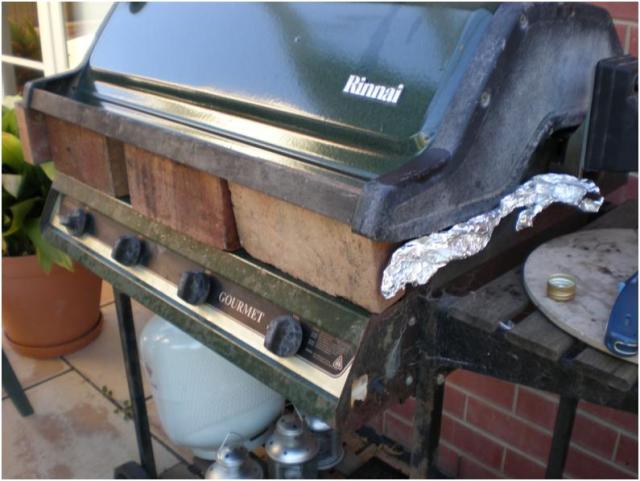 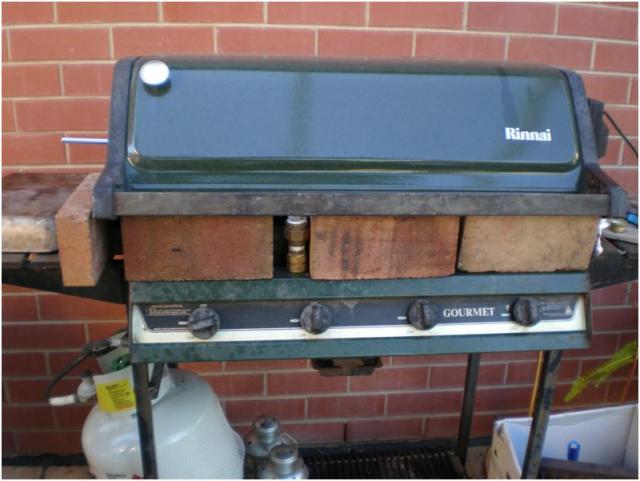 So how did it all turn out? … Thankfully it was a pretty relaxed day and the doubters didn’t hold He who cooks to the deadline. The chicken eventually cooked. Though because of the offset placement in the BBQ they ranged from almost burnt one end to almost raw the other.

And the bricks… well they worked well…. except that checking the done-ness of the chicken meant a very slow process of removing hot bricks, narrowly avoiding having them drop on toes.