After the focused and detailed effort that went into the Gridlock* dress, I needed a quick project or three. In my sewing room, that means knits and separates. 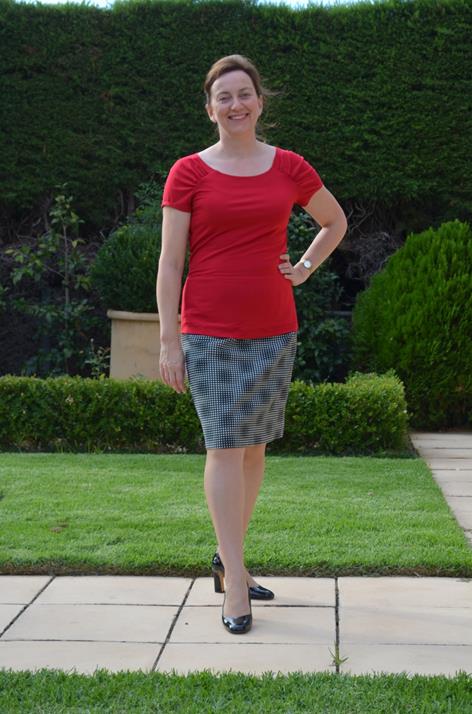 Easy sew, but doesn’t magically give me a waist or distract attention away from my tummy to those lovely gathers on the raglan shoulders. And it looks like it a bit tight over my bust.

These photos were taken after a large Sunday roast dinner, but a nice rounded tummy occurs regularly in my life and doesn’t need to have attention drawn to it, my tummy is perfectly capable of doing so all on its own merits.

The sewing blogger world is full of happy sewists who’ve used this pattern so I really should give this pattern another try, perhaps in ‘slimming’ black. My sister-in-law tried this red one on and ‘ordered’ one in black. So you see where this is going- she gets a black t shirt and perhaps a red one as well..

Another very easy sew. This was supposed to be mine, but it looks a lot better on Felicity than me (see above for reason). It would also look better if it was just rectangles, not a curved skirt piece. I tried too hard!

This skirt has already garnered compliments from Felicity’s stylish older cousin on its first wearing, and it’s the most lovely feeling fabric, so it’s a winner. 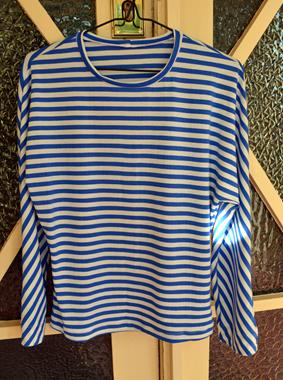 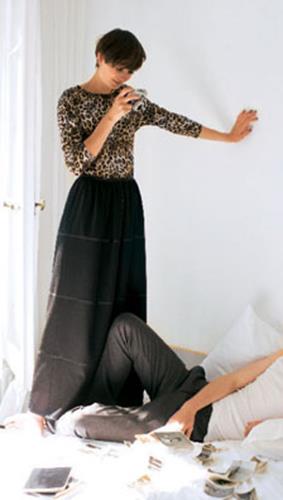 Four seams a neck band and hems. What’s not to love?!

The skirt is an polyester/lycra ITY from Gorgeous fabrics (this one didn’t even hit the stash! It also has a gorgeous hand).

The blue and white stripe in a rayon spandex knit from Gay Naffine (also in the stash for at least 4 years, and with a delightful soft hand)

The red top is slightly shorter than drafted (2 cm) but could be a lot shorter- a common point made by other sewists). I didn’t sew on a neck band, just turned the allowance under and used a double needle.

The skirt is a not a balloon skirt. I didn’t have enough fabric to lose some in the turn up. Now that its Felicity’s skirt it probably would have been fine shorter, but, hey, that’s the way it is now. I still want to try this balloon style; I just need a longer yoke on me for it to be even close to flattering.

The blue and white stripe is drafted a lot longer than I made it. This one is 11 cm from the waist (was cut 14 cm from the waist, with 3 cm taken up in the hem). I didn’t stitch the neck binding down, but constructed it as if it was a neck band. I cut the binding stripe 2 cm shorter than the neck and hoped for the best. It turned out fine.

Burda has you sew a rectangle of stretch wool flannel onto the knit bodice of this dress, gathering the flannel into the knit at the waist. That sounds like a recipe for unflattering disaster that would end up needing to be covered by a wide belt.I’m thinking of drafting a simple A line skirt instead…Apparently the sew-on-afterwards ribbon trim is non-negotiable, but I think I could manage that as a gentle curve.

Sandra (Dilliander) won with her ‘Lekaloru’ coat. Her coat was one of the first posted to the Pinterest site and I went ‘aha – that’s a clever and stylish way to use both sides of the fabric’. She included lots and lots of other details too. A very well deserved win!